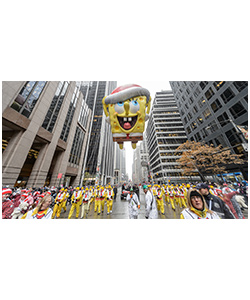 The tradition started in 1924,tying it for the second-oldest Thanksgiving parade in the United States, along with America’s Thanksgiving Parade in Detroit

In addition to the well-known balloons and floats, the Parade also features live music and other performances. College and high school marching bands from across the country participate in the parade, and the television broadcasts feature performances by famous singers and bands. The Rockettes of Radio City Music Hall are a classic performance as well, as are cheerleaders and dancers chosen by the National Cheerleaders Association from various high schools across the country. The parade concludes with the arrival of Santa Claus to ring in the Christmas and holiday season.

On the NBC telecast from in front of the flagship Macy’s store on Broadway and 34th Street, the marching bands perform live music. Most “live” performances by musicals and individual artists lip sync to the studio,soundtrack or cast recordings of their songs, due to the technical difficulties of attempting to sing into a wireless microphone while in a moving vehicle (performers typically perform on the floats themselves); the NBC-flagged microphones used by performers on floats are almost always non-functioning props. Live performances with no use of recorded vocals are very rare in the parade.