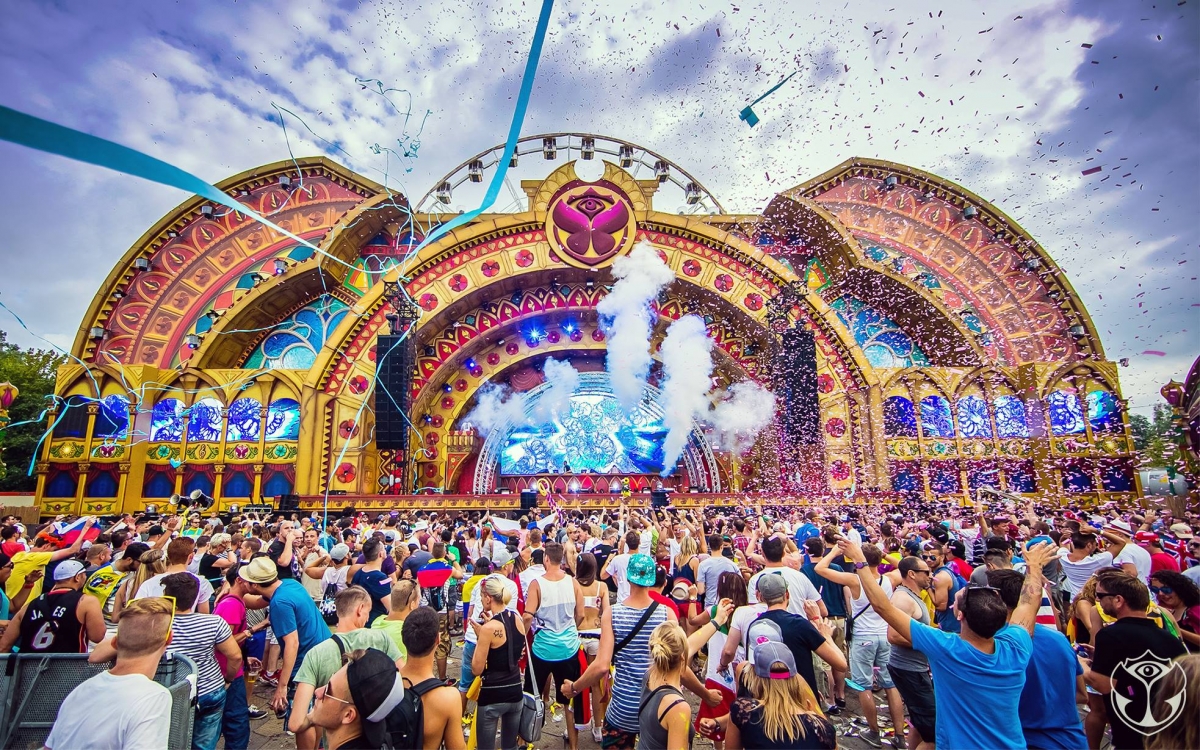 Tomorrowland is the largest annual electronic music festival held in the world, taking place in Belgium.

It used to be organized as a joint venture by the original founders together with ID&T.  The festival takes place in the town of Boom, 16 kilometers south of Antwerp, 32 kilometers north of Brussels, and has been organized since 2005. Tomorrowland has since become one of the most notable global music festivals.

The second festival, on July 30, 2006, hosted Armin van Buuren, Axwell, Marco Bailey, Fred Baker, David Guetta, Ruthless and DJ Zany. The DJ and producer Paul Oakenfold was also announced on the poster, but canceled at the last moment, as he was on tour with Madonna at the time. Emjay, the producer of ‘Stimulate’, the anthem of 2006, performed on mainstage with The Atari Babies. The third year, the festival lasted two days for the first time in its history, taking place on July 28 and 29, 2007.

For the fifth event, ID&T led to even more venues, one ski, and much more. Sun[who?] has included an “I Love the 90’s” stage, where musicians such as Push, Natural Born Deejays and SASH from the dance scene were present. La Rocca performed live at the event for the first time. The special act on the main stage was Moby. Tomorrowland 2009 took place on July 25 and 26 and attracted 90,000 people.

Tomorrowland sold out days before the event, with a record attendance of 120,000 visitors over two days, in 2010 Dada Life, Dimitri Vegas & Like Mike and Tara McDonald wrote the official anthem “Tomorrow/Give Into The Night” performing the song twice on the main stage after Swedish House Mafia. The track was made by Like Mike, Dada Life and Dimitri Vegas and the vocal melody and lyrics were written and recorded by Tara McDonald. The song reached number 5 in the Belgian commercial charts and is the biggest selling anthem for Tomorrowlands to date.

2011 marked the festival’s expansion to three days. Only a few days after the official pre-sale of tickets kicked off, Tomorrowland was completely sold out and had over 180,000 visitors. David Guetta, Nervo, Swedish House Mafia, Avicii, Tiësto, 2ManyDJ’s, Carl Cox, Paul van Dyk, Tensnake, Laidback Luke, Brodinski, De Jeugd van Tegenwoordig, and dozens of others performed. It was voted the best festival of its kind in the world at the International Dance Music Awards in 2012.

Tomorrowland 2012 took place between from July 27–29, 2012, at the De Schorre, a provincial recreation area in Boom, Belgium. The line-up consisted of 400 DJs, such as Armin van Buuren, Ferry Corsten, Skrillex, Avicii, Marco Bailey, Skazi, David Guetta, Nervo, Hardwell, Swedish House Mafia, Afrojack, Steve Aoki, Carl Cox, The Bloody Beetroots, Paul van Dyk, Martin Solveig, Chuckie, Fatboy Slim, Dimitri Vegas & Like Mike and Pendulum playing on fifteen stages each day. 185,000 people from over 75 countries around the world were in attendance, with 35,000 of them staying in Dreamville. Because of the enormous success of Tomorrowland and the fact that it is a Belgian festival, ID&T decided to give Belgians an exclusive chance with a pre-sale (80,000 of the 185,000 tickets) on March 24. In less than one day, all of the tickets sold out and at some moments there were 2,000,000 people on the online waiting list. The worldwide sale started April 7. Within 43 minutes, the other 100,000 tickets sold out. In addition to regular tickets, Tomorrowland partnered with Brussels Airlines to provide exclusive travel packages from over 15 cities around the world. Other highlights of the festival were the Cloud Rider, the highest mobile Ferris wheel in Europe, and the fact that 25 airlines were organised to bring spectators to the festival from all over the world.

Tomorrowland 2013 took place on July 26–28 and reached over 200,000 attendees at De Schorre in Boom, Belgium. Full madness passes sold out in 35 minutes, and the remainder of tickets sold out in a reported one second.Tomorrowland also offered its Global Journey packages and Brussels Airlines had 140 additional flights from 67 different cities around the world to get festival goers with 214 different nationalities to Boom, Belgium.

To celebrate the 10th anniversary of the festival, and to meet the high demand for tickets, the 2014 edition of Tomorrowland would be held over two weekends; 18–20 July and 25–27 July. The line-up for both weekends would be more or less the same. In April 2014, MTV announced that it would produce two hour-long MTV World Stagespecials featuring performances from the festival (to be aired in August 2014), and that it would produce a documentary surrounding the 10th anniversary of Tomorrowland. On April 16, composer Hans Zimmer and Tomorrowland announced that they combined forces for the creation of a classical hymn that would premiere during the 10th anniversary edition of Tomorrowland. Veteran DJ Dave Clark, who hosted the second largest stage, believes that “a more diverse lineup that covered a wider range of underground music” was Tomorrowland 2014’s top selling point. More than 400,000 people have attended Tomorrowland 2014.