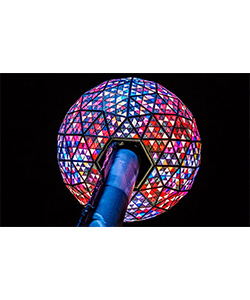 Located on the roof of One Times Square, the ball is a prominent part of a New Year’s Evecelebration in Times Square colloquially known as the ball drop, where the ball descends 141 feet (43 m) in 60 seconds down a specially designed flagpole, beginning at 11:59 p.m. ET, and resting at midnight to signal the start of the new year.

To facilitate the arrival of attendees, Times Square is closed to traffic beginning in the late afternoon on New Year’s Eve. The square is divided into different viewing sections referred to as “pens”; as attendees arrive, they are directed into the pens sequentially as they fill. Particularly following the September 11 attacks, security at Times Square on New Year’s Eve has been strictly enforced by the New York Police Department (NYPD); attendees are required to pass through security checkpoints before they are assigned a pen, and attendees are prohibited from bringing backpacks or alcohol to the event.

Festivities formally begin in the early evening with the raising of the ball at around 6:00 p.m. ET.Party favors are also distributed to attendees, which have historically included large balloons, hats, and other items branded with the event’s corporate sponsors. The hours before the drop are preceded by hourly countdowns for the arrival of the new year in other countries, along with live music performances by popular musicians. Some of these performances are organized by, and aired on New Year’s Eve television specials which are broadcast from Times Square.[7][6] Since the 2005–06 edition of the event, the drop has also been directly preceded by the playing of John Lennon’s song “Imagine”; while the original recording was previously used, it was replaced by a live performance by a pop musician for 2011.The drop proper begins at 11:59 p.m. ET, the final minute of the year, and is ceremonially “activated” by a dignitary or celebrity joined on-stage by the current Mayor of New York City.The conclusion of the drop is followed by fireworks shot from the roof of One Times Square, along with the playing of “Auld Lang Syne”, “Theme from New York, New York” by Frank Sinatra, “America the Beautiful” by Ray Charles, “What a Wonderful World” by Louis Armstrong, and “Over the Rainbow” by IZ