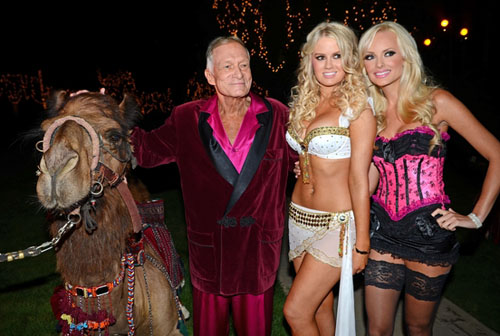 Name-dropping can be considered one of the biggest delights or banes of living in Los Angeles.  Whether casually ordering coffee in your local coffee shop or sipping your martini at the current ‘it’ club of the month.  One can find numerous stars, athletes, singers, and other people of notable fame.  Name dropping gives much fodder around the old water cooler in many offices.  It can also be considered a hobby for the unique set of people who believe that it gives them a sense of importance in a town where people are more examined than a scientist looking into a microscope of amoebas.  In that case, maybe the amoebas have it better.  Then, to examine the art of name-dropping more closely, the first thought that enters into a mind would be – Where is the best location to gain the maximum amount of famous people to name-drop about? That is what will be explained in this little article on the art of name-dropping.  To find the best location, the best place to start is at the top or more closely at the chest.  It can only be logical to believe that famous actors flock to where there are a lot of buxom half naked women.  Half-naked women, I wonder where we can find them?  The best bet to look is the Hugh Hefner’s Midsummer’s Night Dream Party at his notorious playboy mansion.  This party is considered literally, the party of the year.  Depending on which gender you are; it can be a delectable array of eye candy for the male sex or a comparison between ‘natural’ and ‘silicon’ for the female sex.  The Midsummer’s Night Dream party is a night of mingling between the stars and the lucky few who can tell their friends the next day ‘Hey, I met Fred Durst and he is not that hot!’  Hence, the reason why the Midsummer’s Night Dream party is the best place to be if you a connoisseur of
name-dropping.

Back to the playboy party, this journalist had the lucky chance to be a ‘plus one’ for this super-uber exclusive event.  Moreover, mind you, the ‘plus one’ did not come at an easy price.  One of the requirement is everyone must attend the event in pajamas or lingerie.  You can imagine which one I had to wear. Picking out the lingerie itself, caused me about three years of premature aging and shook the very pillars on my views of surgical enhancements. (I can understand now, why women would consider having it.) It was a truly Midsummer’s night and the fact of an open bar only made the night much younger and more vibrant.  The open bar meant as the night wore and the more people that got drunk meant increasing my chances of looking good.(I never realized how much I appreciated the concept of beer goggles until then.)  Being at this party was like being at a buffet.  If you saw an actor or singer you liked, you just went right up to them; if you decided that you didn’t like them, you moved on to the next tasty looking thing.  Big stars, little stars and I mean little-  mini me was hanging out with his mini entourage. (Yes, his girlfriend is taller, but only by four inches) and all the other non-important humans whose job it is to make the famous more famous.

The women were glamorously decked out in full body paint.  I believe, the minimum requirement to have body paint on was a 36-D.  I’m absolutely positive because on the can it said ‘anything less than a 36-D, fully mounted against gravitation, may cause sore eyes in others.’  From women in fully dressed lingerie to strategically dressed lingerie; it was a feast for the eyes, a visual presentation to the glory of womankind and the jerk who decided to invent lingerie.  I was a bit surprised that surgeons didn’t sponsor these women.  You know , free boob job if they have a little placard underneath their boobs saying something like this, ‘Dr. Kim, Beverly Hills, 555-0101, 10% off if you mention this ad’

An extravaganza night and many drunk people which meant, ‘Hey, you came out in some movie, right?’ being the opening line of many conversations.  The only thing being passed around more than weed was business cards and phone numbers being exchanged on Blackberrys. Back to name dropping, I have provided a look at what my conversation has been for the last couple of days after attending Hugh Hefner’s Midsummer’s Night Dream party.

Me: Hey, what’s up?
Friends: How was the PARTY?
Me: No big deal (meaning it is a big deal just trying to play it off), I just hung out with Fred Durst, Eric Benet and Jermaine Dupri.
Friends: No way!
Me: Yeah, it was alright.  Man, Jon Lovitz is pretty funny guy.
Friends: Dude, you’re so lucky!
Me: Yeah, well Kato Kaelin was so all over me, gave me a huge kiss on the cheek. (Actually, a small peck while mispronouncing my name)
Friend: Kato was there?
Me: Well, I gotta go. I have to call Fred (Durst) about that video we might be doing next week (outright lie but, at this point my friends would eat up anything)

If you love to name-drop then your next destination is trying to get your unfamous butt into this very exclusive party.  Be it sleeping with a short, fat, balding man (the only accessible ones at the party) or by paying exorbitant amounts of money because one thing is for sure.  When you are old and no one likes you can always tell them that you went to the Midsummer’s Night Dream Party.